Yesterday = my BEST tantrum yet!!

Yes it was one of those frustrated filled, red face, hair pulling out tantrums which ended up with "ALL LAPTOPS, IPODS HERE NOW"
(no chance of a please in that teeth clenched sentence).

After a week of kids fighting, the boy regularly asking to go on  minecraft, router playing up, countless updating and backing up needed to be done by me..... yesterday Itunes crashed AGAIN. All I wanted to do was load an audiobook onto Mollies ipod but no it wouldn't work.
After 1 hour of trying and failing with tension mounting I exploded!

There was silence in the house, no one was game to speak, everyone quietly gathered up their equipment and put it in the computer room cupboard, we all looked at each and we felt a collective weight lifted from us....we felt total FREEDOM!!!

No hint of an exaggeration, within 5 minutes, the  kids were outside on their bikes. By the end of the day the kids had enjoyed drawing, puzzles, more bike riding, played badminton, helped with dinner, helped with household chores...ALL without one fight, whinge, moan.

Today the kids wanted to get up early to have a tennis practice and now are back on their bikes playing their timed lap game around the house.

If you asked me last week if we were a technology lead family I would have answered a definite NO. I didn't think it consumed our lives, we had usage rules but somehow those rules became hazy and what ended up happening was, we were addicted...minecraft, movie making, facebook, emailing, forums, shopping, checking stuff. I admit, there was learning involved ie new skills, researching, homeschooling stuff but goodness, what happened to going to the library!!

It is naive to think that the equipment will stay in the cupboard for ever but I have given us this week off. Television at night is fine, I will need a little computer time for emailing, blogging, bill paying but once that is done, it goes off.

Together as a family we will slowly introduce it back into our lives but for now FREEDOM!!
It has been a real learning experience for the kids as well as me. Until I removed it, we just didn't realise how addicted we were.

To be honest, I have done this before so the transition into a technology free life was easy for the kids, they knew what to do but the first time was totally different. There was a detoxing period and it got ugly!!
Boredom, anger, whinging but after a couple days we moved through it. It was definitely worth it!

I wanted to share this just in case it rings true to another family. We have our kids for such a small amount of time, lets turn the technology off and enjoyed them!

Oh timer has gone off....I have a banana cake and jam drops in the oven, a gorgeous pink quilt to finished for my niece and the floor to clean
Back to real life and loving it!!

Posted by Rainbow Made at 11:01 AM No comments:

This week the kids planned, priced and prepared a meal for us.
First up was Lucas! 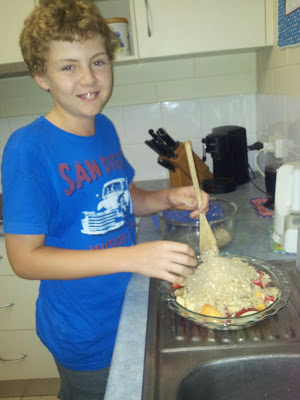 He made spaghetti and meatballs and for dessert apple crumble.
Price was $22.50 for both courses
(with leftovers) 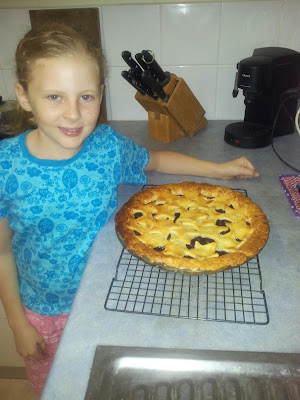 Mollie made sushi and for dessert blueberry pie.
Price $30.00
(smoked salmon and avocado on the sushi, nothing but the best)
with leftovers.
All was very yummy!
You know, I really like this project idea ;)
Posted by Rainbow Made at 4:58 PM No comments:

Bartering over the fence.

Nothing better then sharing excess produce with the neighbours. Our fresh eggs for their eggplants and limes....yumm!!! 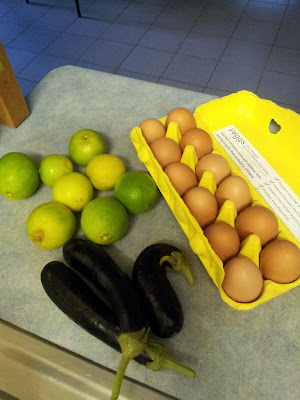 Posted by Rainbow Made at 9:48 AM No comments:

Homeschooling with the chickens

Literacy work from the chook run!
Not sure how much 'formal learning' got done, but it looks like heaps of fun.

We had our first chicken death last week. I was hanging out the washing and noticed all the hens in the corner of the coop..including the new ones. This was very unusual behaviour, normally they are out in the run scratching around and exploring.
I went down to the run and there was one of the older and much loved girls, dead in the corner. Dave thought it was a hawk and two hours later it was confirmed as it came back for another go the chickens.
Luckily we had them locked up in the coop.

For a couple days, we took turn on guard duty.
The kids did their work form the run 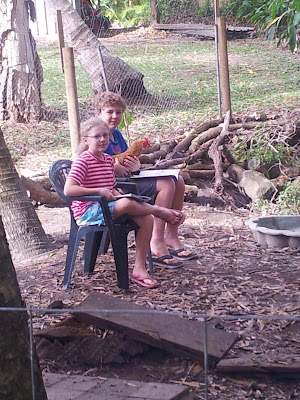 I did my knitting / crocheting from the run

They have settled back into their old routine (a bit of a pecking after a re shuffle) and the hawk hasn't come back. We are lucky to have had them for 2 years without an incident.

Chickens are the most relaxing pets to have. I spend a good 40 minutes sitting and watching them. They are THE best pets.
The would come up for a pat, go and dust bath, have something to eat, lay an egg. All while I sat and watched them.
All is calm in the coop now, and we are still getting 4 -5 eggs a day.
Good girls :)

Posted by Rainbow Made at 7:43 PM No comments:

Our little corner of the blog world has been a little quiet. Why?
This ballerina has been enjoying the local eisteddfods

We have been sewing some very special presents
A quilt

And a thankyou pressie!

And we welcomed some new cuties into our flock...

We hand raised 4 chickies but ended up with two roosters. We rehomed the roosters to lovely family. The two hens are in with the girls and other than a little pecking, all is going well.

And some more news - next year is our year of travelling YAY!!
We are going on another big holiday overseas, so lots of planning, organsing, researching is happening here atm.

I have been a little slacko in the blog department but I have heaps to share!!

Posted by Rainbow Made at 11:06 AM No comments:

Yet another craft - drawing!

Yep, portrait drawing, that I mostly do while the kids are doing their work. They are independant learners which leaves me free to do my own thing and drawing keeps me closeby for questions!

I have been studying portrait drawing from dvds, you tube, and books. I am still very much in the beginning stage.This is supposed to be my niece but no, it doesn't look anything like her lol.
Lucas reckons it is too good not to finish so he suggested calling her Elizabeth. (not my neices name lol).I will finish Elizabeth, hair to go..scary!

Posted by Rainbow Made at 6:54 AM No comments:

Rainbow Made
North Queensland
I am a homeschooling Mum who loves creating, loves colour, AND loves sewing!! This blog is a combination of family, friends, homeschooling, creating and home.. I hope you enjoy our journey!!